Malware – A One Night Stand

January 13, 2014November 21, 2021 MalwareTech
Last night i had this idea that ransomware and other “stab you in the face then steal your wallet” types of malware are likely a result of the antivirus industry becoming better at dealing with malware. It sounds like a crazy claim, but with a little explaining I think most people will see my point.

C&C IP and DNS blacklisting
Large public databases of IP addresses and domains associated with botnet control servers are updated frequently; Some firewalls use these databases to prevent malware connecting to the control servers, ISPs use them to suspend offending servers, and registrars to suspend offending domains. For a botmaster blacklisted IPs usually mean having to purchase more or even move server, if all the domains associated with the botnet are suspended the botmaster would lose total control of all the bots.
Monetizing
Generating an income can prove challenging: As soon as anti-virus blogs start monitoring a botnet, legitimate companies want nothing to do with it (this usually leads to shady dealings on underground forums).
Crypting
Currently it only takes a few days for a file to be detected by multiple anti-viruses, for files being distributed by known botnets, a sample can be detected by multiple anti-viruses in a few hours. Contrary to popular belief: nearly all usermode rootkits and most kernelmode rootkits cannot prevent anti-viruses removing their files (even if a reboot is required); once a sample is detected the botmaster has until the user or anti-virus reboots the computer to update the file with an undetected one, or the computer is released from their control. As a result of fast virus signature generation someone maintaining a large botnet would need to update all the bots with a non-detected exe at least once a day or risk losing bots.
Takedowns
Recently botnet takedowns have been gaining popularity. Most of the large botnets take a severe beating for researchers and law enforcement (which costs the botnet owners time and money), even peer-to-peer botnets aren’t safe due to the ever growing resource pool under the control of malware researchers.

To an extent ransomware operations are similar to botnets: The malware spreads across various vectors (email, exploit packs, warez), requires the executable to be undetected by anti-viruses in order to improve chance of successful infection, and sometimes even phones home to a command and control server; however, ransomware works in a way that solves the problems highlighted with botnets.
Ransomware families such a winlockers do not require a C&C server, once a computer is infected the system is locked and the victim is forced to pay a set amount in order to receive  an unlock code. Cryptolockers encrypt a users files and required the user to buy a decryption key in order to regain access, once the files are encrypted there is no way to decrypt them without paying for the decryption key. Most cryptolockers store the decryption key on the C&C server, so taking it down only prevents victims from retrieving their files.
Forcing a victim to pay an upfront ransom of between a few and a few hundred dollars could potentially make more money than the computer would have made in a whole year as part of a botnet. Once the victim has paid the computer is no use to the group running the scheme and it can be disinfected; this removes the need for keeping the computer up to date with undetected executables and trying hard to hide the presences of the malware.

As you can see most ransomware works on a principal of infecting a victim, forcing them to hand over money, then getting off the computer as quickly as possible; This already hinders malware removal efforts, but if the ransomware has encrypted the files removal is entirely pointless (the victim will have no way to get their files back).
As the anti-virus industry advances and botnets get harder and harder to maintain, i imagine it won’t be uncommon to see much more dangerous and low maintenance malware that revolves around aggressively extorting money from victims as quickly as possible. 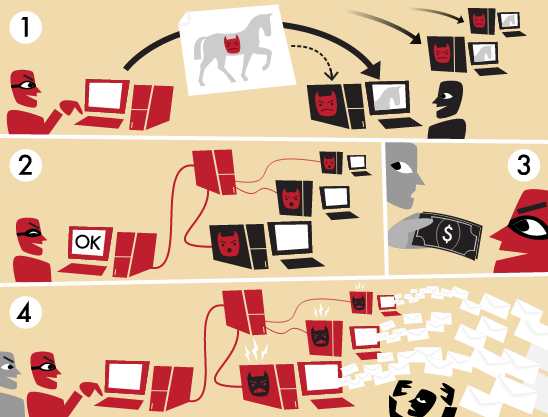