January 2, 2015November 21, 2021 MalwareTech
Distributed Denial Of Service, or DDoS, is an attack in which multiple devices send data to a target device (usually a server), with the hope of rendering the network connection or a system application unusable. There are many forms of DDoS attack, but almost all modern attacks are either at Layer 4 (The Transport Layer) or Layer 7 (The Application Layer), I’ll cover both of these in depth. Although DDoS attacks can occur between almost any devices, I’ll refer to the attacker as the client and the victim as the server.

TCP, USD, SCTP, DCCP and RSVP are all examples of Layer 4 protocols; however, we’ll focus on UDP as this is most commonly utilized for DDoS attacks. UDP is generally preferred over TCP based attacks because TCP requires a connection to be made before any data can be send; if the server or firewall refuses the connection, no data can be sent, thus the attack cannot proceed.
UDP allows for the client to simply send data to the server without first making a connection, It’s similar to the way in which mail reaches your house without your authorizartion, you can do whatever you want with it once you receive it, but you are still going to receive it. This is why software firewalls are useless against UDP attacks, because by the time the packet has reached your server, it’s already traveled through your server’s datacenter. If the datacenter’s router is on a 1gb/s connection and more than 1gb/s of UDP packets are being sent, the router is going to be physically unable to process them all, rendering your server inaccessible (regardless of if the server processes the packets or not).
The basic idea of UDP is to saturate the connection, rather than over-stress the server by sending it too much data. If the attack is powerful enough, it won’t even need to reach the server, it can simply overload an upstream device responsible for routing data to the target server (or even that region of the datacenter).
If we consider our hypothetical, inaccurate and oversimplified datacenter: We have a 3 Gb/s line connecting section 1 of the datacenter to the rest of the network, that 3 Gb/s line is then split into 3x 1 Gb/s lines for each of the 3 racks, each rack contains 3 servers, so each 1 Gb/s line is split into 3x 333 Mb/s lines. Let’s assume all 3 servers in rack 1 have the world’s best firewall; it might protect them all from DDoS, but if the attack exceeds 333 MB/s, the server will be offline regardless, if the attack exceeds 1 Gb/s the rack will be offline, and if the attack exceeds 3 GB/s the entire section will be offline. No matter how good the server’s firewall is, the server will be offline if the upstream routers cripple under the load, it’s theoretically possible to take offline an entire datacenter or even a whole country by sending a large enough attack to one server withing that datacenter/country.

Mitigation of UDP attacks can only be performed by the datacenter themselves by deploy specialized routers (commonly known as hardware firewalls) at strategical points within the network. The aim is to filter out some of the DDoS at stronger parts of the network, before it reaches the downstream routers. A common method of “mitigation” among lazy ISPs is to simply stop routing any traffic to the IP address being attacked (known as null routing), this results in the server being offline until the datacenter staff decide otherwise, meaning the attacker can stop attacking and enjoy a nice nap.

Layer 7 DDoS attacks are probably the easiest to carry out in terms of resources needed, because the idea is not to over-saturate the network, but to simply lock up an application on the server. Due to the fact the attack isn’t taking offline the whole server, it’s easy for the sysadmin to login and begin to mitigation.

An example of a Layer 7 attack against a website would be to constantly send GET requests to a page which performs lots of SQL queries; most SQL servers have a limit on the amount of queries they can process at one time, any more and the server will have to start denying requests, preventing legitimate clients from using the website.

Attackers don’t even need to flood the server with requests, it’s possible to simply overload the application by maintaining open connections (without sending tonnes of data). Slowloris is an example of such attack where the attacker opens connections to the HTTP server and sends HTTP requests bit by bit, as slowly as possible. The server cannot process a request until it’s complete, so it just waits indefinitely until the entire request has been sent; once the maximum number of clients is hit, the server will just ignore any new clients until it’s done with the old (of course the old clients are just going to continue adding useless data to the HTTP request, keeping the connection busy for as long as they can).

DDoS amplification is nothing new, it has actually been around so long that Microsoft patched their OS to try and prevent attacks (I’ll go over this later). Amplification attacks are nearly always UDP because it does not require a connection, UDP packets operate a lot like a letter in the mail: they have a return address (known as the source address) in which the server will reply to, but as with any letter, there is no guarantee the return address matches that of whoever sent it.
For an amplification attack to work, we first need a service that works over UDP and has a response message that is larger than the request message. A good example of this is a DNS query: the request to lookup the DNS is only about 60 bytes, but the UDP DNS response can be as large as 4000 bytes (due to long txt records), that’s a 1:67 amplification ratio. All the attacker needs to do is find a DNS that when queried will result in a large response, then send a query to said DNS with the victims IP and the source address, resulting in the DNS server sending the response to the victim instead of the attacker. 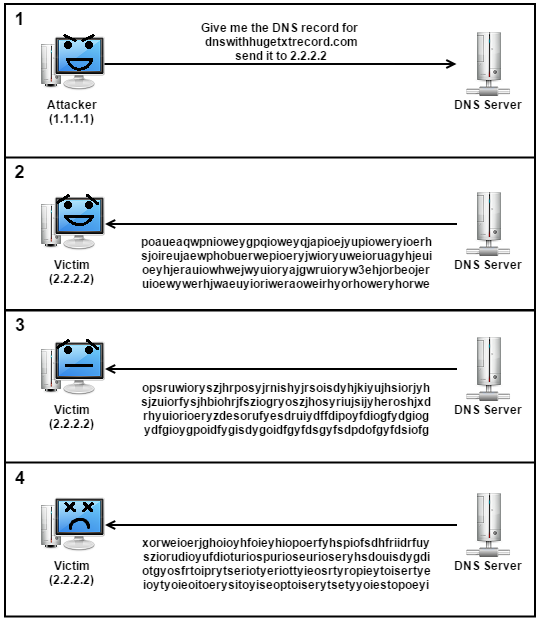 Due to the size different between a DNS request and DNS response, an attacker can easily transform a botnet capable of outputting 1 Gb/s worth of requests into 60 Gb/s DDoS attack, this is a huge problem. In order to mitigate these kinds of attacks, Microsoft introduced an update to the windows network stack in XP SP2, which would prevent the system from sending UDP packets with a source address other than its own. Some ISPs took a similar approach by inspecting outgoing UDP packets and dropping any which did not contain a source address owned by the sender. As a result of such measures, Amplified DDoS attacks are primarily sent from linux servers running in a datacenter that does not implement source address verification.

Who Can Perform DDoS Attacks?

In the past DDoS attacks were only for seasoned hackers with large botnets under their control, due to the fact home computers don’t have much bandwidth, requiring hundreds, if not thousands, of them to take offline a single server. Nowadays people can just buy (or hack) servers and use them to perform attacks; a botnet of as little as 2 servers can take offline most website. An attacker doesn’t even need to acquire their own servers, there are many services utilizing bought/hacked servers to perform DDoS attacks for as little as a $5/month subscription fee. It is also believed that Lizard Squad were able to take offline massive services such as PSN and XBL by abusing the Google Cloud free trial, using the virtual servers as DDoS bots.